Saleem Zaroubi        سليم زاروبي
I am an astrophysicist at the Kapteyn Astronomical Institute, Faculty of Mathematics & Natural Sciences, University of Groningen. My field of research is cosmology - the science that studies the Universe as a physical entity and explores its overall properties, formation and evolution. In particular, I work on various issues related to the formation and evolution of the Large Scale Structure of the Universe as probed by a number of astrophysical tracers (i.e., galaxy peculiar velocities, redshift galaxy surveys, Cosmic Microwave Background anisotropy, the Lyman-α forest observed in the spectra of distant quasars and the 21 cm hyperfine spin-flip transition of neutral hydrogen). Currently, my main scientific activity is centered on studying the Epoch of Reionization (EoR) of the Universe -- the period during which the gas in the Universe transformed from neutral to ionised. More specifically, I am a member of the LOFAR-EoR key Science project of the LOFAR radio telescope, which is the most promising instrument for studying this epoch.
​​ 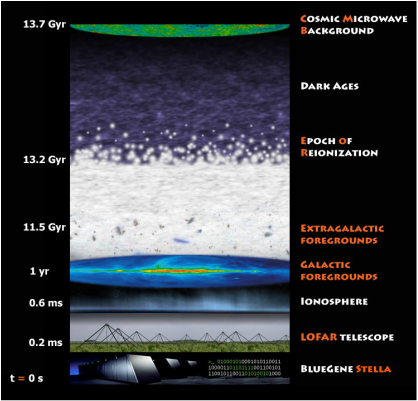 Cartoon of the likely development of the EoR. About 500,000 years after the Big Bang (z ~ 1000) hydrogen recombined and remained neutral for a few hundred million years (the dark ages). At a redshift, z ~ 10, the first stars galaxies and quasars began to form, heating and ionizing the hydrogen gas. The neutral intergalactic medium (IGM) can be observed with LOFAR through its redshifted 21 cm spin-flip transition up to redshift 11.5. However, many atmospheric, galactic and extragalactic contaminants corrupt the 21 cm signal